I made a schoolboy error last night when measuring current through the Ulka pump on my modified Gaggia Classic, which resulted in a very loud explosion of the SSR (pictured below).

The machine was working perfectly well, but I just wanted to take a few measurements…. which ended badly due to a very simple mistake. I thought this would be an interesting example to share, to demonstrate the risks involved in this kind of experimentation!

The intention was to measure the AC current through the pump when using the IGBT versus the current with a direct connection. First of all, I started by putting my multimeter on the AC current range in series with the IGBT (between the IGBT collector and the pump). That went without incident.

The next step was to measure the current without the IGBT, and here’s where I made the error. I disconnected the IGBT collector lead from the pump, inserted the meter between the pump and Neutral, and powered on. There was a tremendous BANG like a gunshot, a cloud of smoke rose from the machine, and all the lights went out. Oops.

I didn’t immediately spot the problem, until I examined the circuit diagram, at which point it became obvious (see below). When I disconnected the wiring, I had accidentally removed the series diode D7 which prevents AC flowing back through diode D6. Placing the meter across points (A) and (B) and setting on the AC 10A current range created an effective short-circuit from the anode of D6 to Neutral: 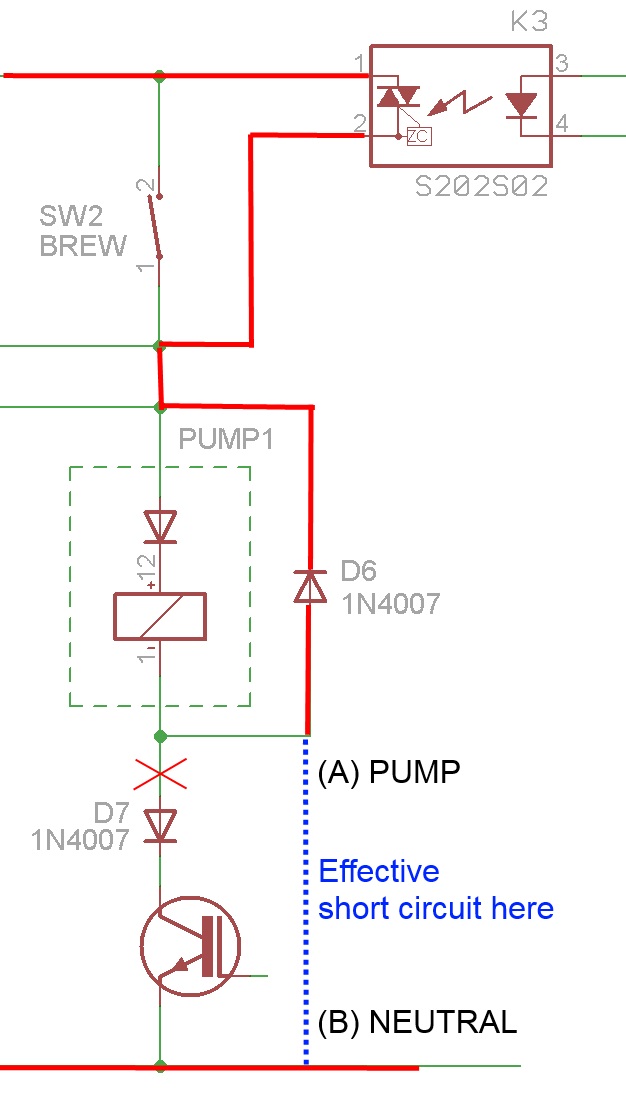 This allowed AC to flow from Neutral, through D6 and through the SSR K3 directly back to Live with no load in the circuit, as shown by the bold red line above. The poor, unsuspecting SSR (rated 8A) and diode D6 wouldn’t know what hit them! They both died a quick death, before the 13A fuse in the plug blew. The SSR blew with a loud explosion and a cloud of smoke. The diode failed silently, but went short-circuit.

After this, I was pretty annoyed with myself for not double-checking the circuit diagram before powering on. Concerned about the possibility of toxic chemicals from the burnt SSR, I also had to strip and clean the machine, which wasn’t a whole lot of fun. On the positive side, I did have a spare SSR, diode and fuse, so I was able to fix it that same evening, and the machine is working again now!

Next time, I will check my wiring much more carefully before powering on…