One of the famous features of the Vectrex is the annoying buzz from the speakers. After a while, it was just too irritating and I decided to try and fix it. Some purists say that the buzz is an authentic part of the Vectrex experience, but I’m sure the engineers who designed it didn’t intend it to buzz 🙂

Unfortunately, the LM386-3 audio amplifier (pictured below) is mounted on the power board, right next to the wires which drive the CRT yoke magnets. The amplifier is fed by a poorly screened audio cable which runs to the logic board. The screened cable is only connected to ground at one end (the power board). Consequently, it picks up a lot of interference… 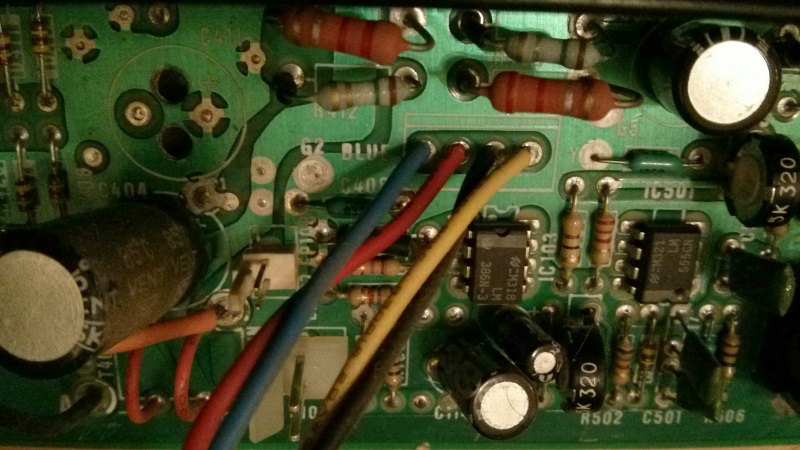 The usual fix is to install some better quality screened cable, and disconnect one of the ground leads (the theory being that this eliminates a ground loop). However, the new cable may not completely eliminate the noise, because it doesn’t address the issue of the amplifier being located on the power board, and I didn’t like the idea of disconnecting ground. Another approach is to add a pre-amplifier to boost the level before it reaches the LM386.

I decided to try a different approach, by installing another power amplifier, well away from the power board and magnets. Originally, I planned to buy an LM386 chip and assemble an amplifier on strip-board. However, I then discovered you can buy a ready made module built around the LM386 for about the same price as the components: 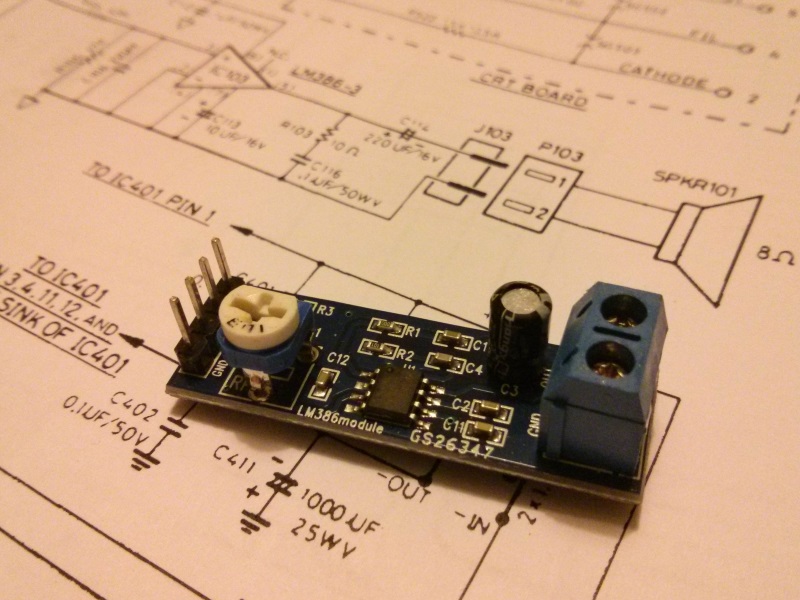 These modules cost about £0.99 on eBay, and are widely available. I couldn’t find a schematic, so reverse engineered it (below):

For comparison, here’s the original amplifier schematic for the Vectrex:

The main difference is that the Vectrex has pin (1) on the LM386 not connected, which sets the gain to 20. However, the new LM386 module has a gain of 200, due to the capacitor C1 bridging pin 1 and 8 on the module. With this much gain, we might still get the buzz, and we could also get clipping/distortion.

Fortunately, this is easy to fix by removing R1 from the module (actually R1 is a 0 ohm link, perhaps provided for this purpose). This disconnects the capacitor between pin 1 and 8 of the LM386, reducing the gain to 20, the same as the Vectrex.

The module has two screw terminals for the output, so a couple of short wires in these allow the existing speaker connector to push fit: 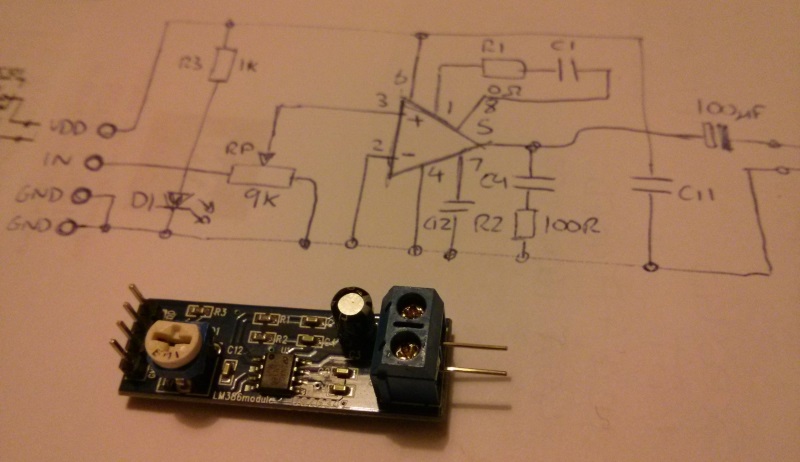 Next, I removed the Logic Board and replaced the audio cable with a higher quality foil screened cable, soldering it to the ground and wiper of the Vectrex volume potentiometer, on the component side of the Logic Board: 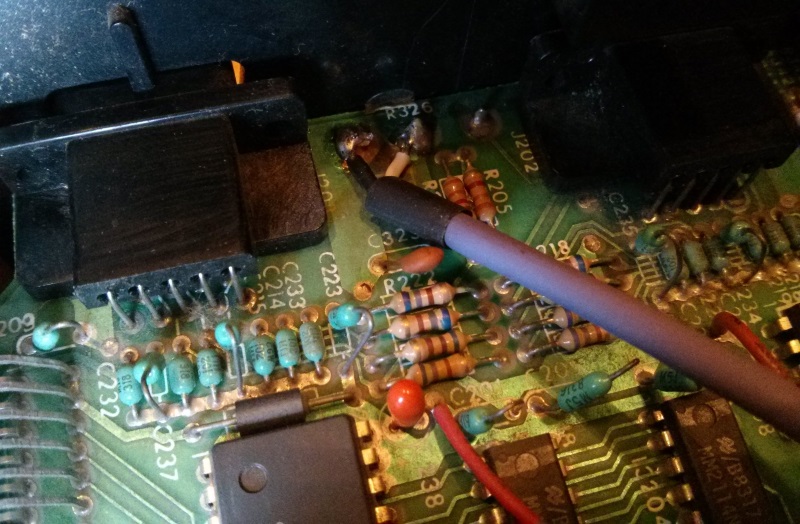 Although the original Vectrex LM386 is powered from the +9V rail, I decided to power the new amplifier module from the +5V rail on the Logic Board, to avoid having to run a +9V power line from the Power Board. To do this, I ran a twisted pair of red/black wires from the +5V and GND rails nearby the AY3-8192.

The audio cable, 5V and GND are installed in a 0.1″ crimp housing to fit the 4-pin head on the module. The finished assembly is shown being tested outside the Vectrex below, before it was finally installed inside the machine: 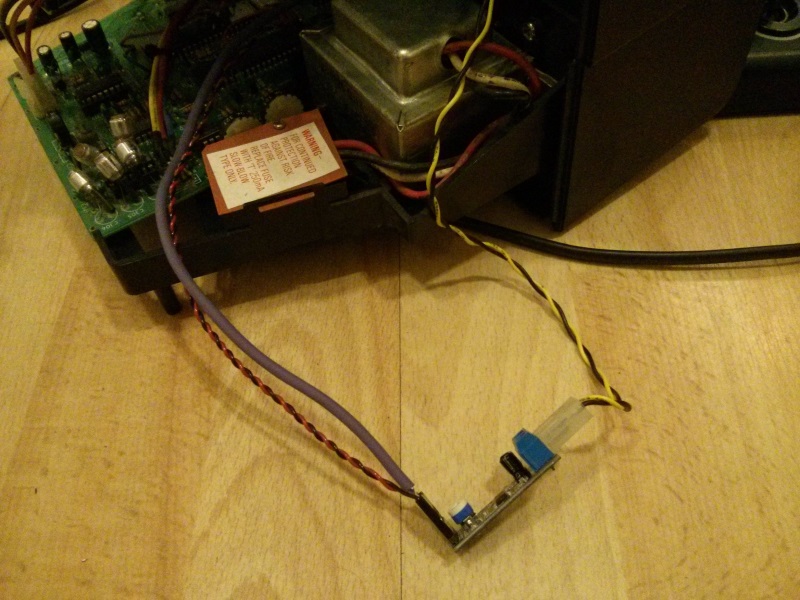 To mount the board, I used a self-adhesive cable tie base just inside the cabinet above the speaker. The module is cable-tied to this base.

The end result is a massive improvement, completely eliminating the buzz!

Here’s a photo of the final installation: 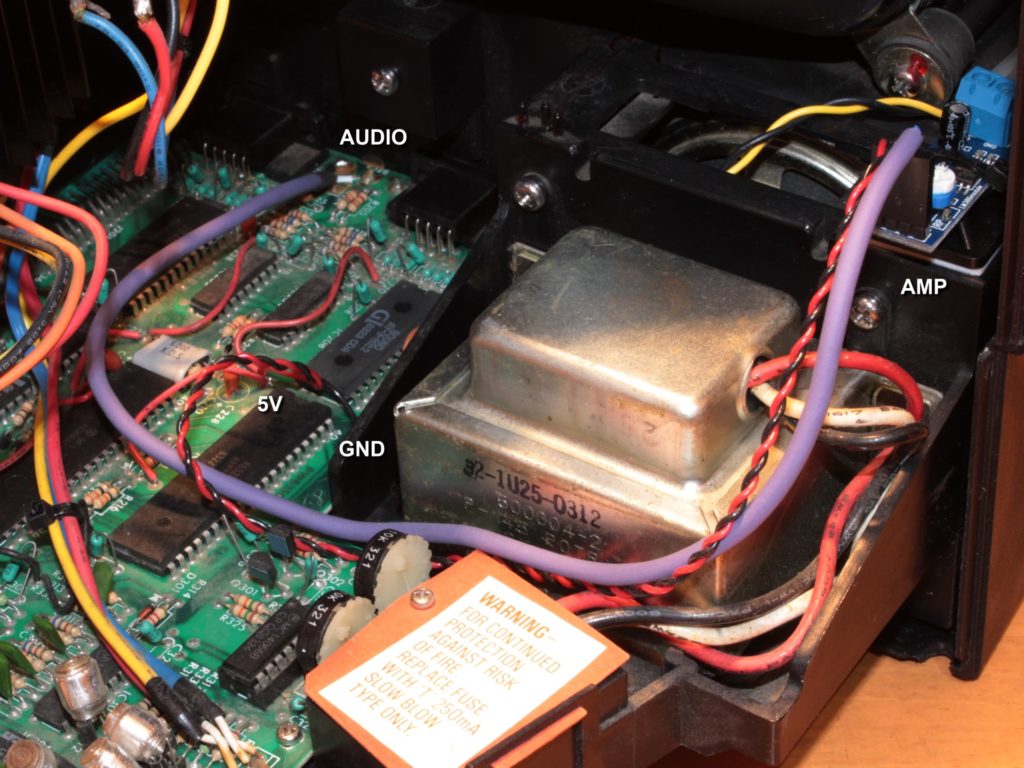 I recently stumbled on this nice video (in German) where someone has tried this same modification: