I’ve wanted a Vectrex Console for quite a while, and finally acquired a broken Vectrex for a reasonable price on eBay (where else) with the idea of repairing it…

It didn’t begin well when the courier who delivered the package left it hidden behind a car… overnight… in the rain: 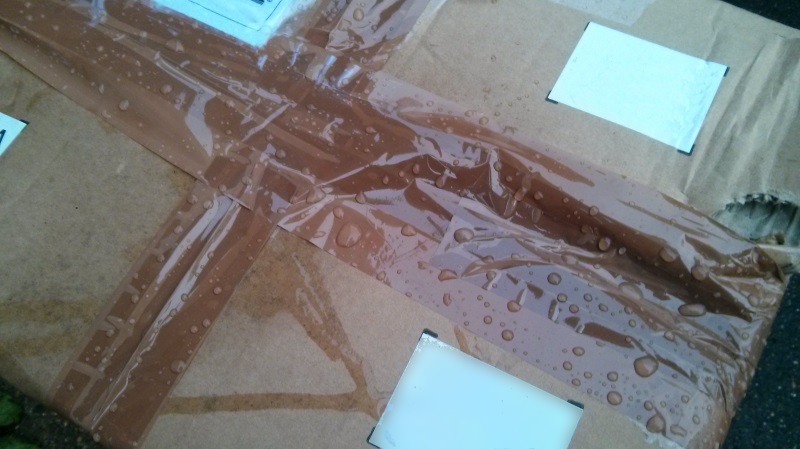 It was sitting in a puddle, and got a fairly good soaking. Here’s the Vectrex emerging from the box: 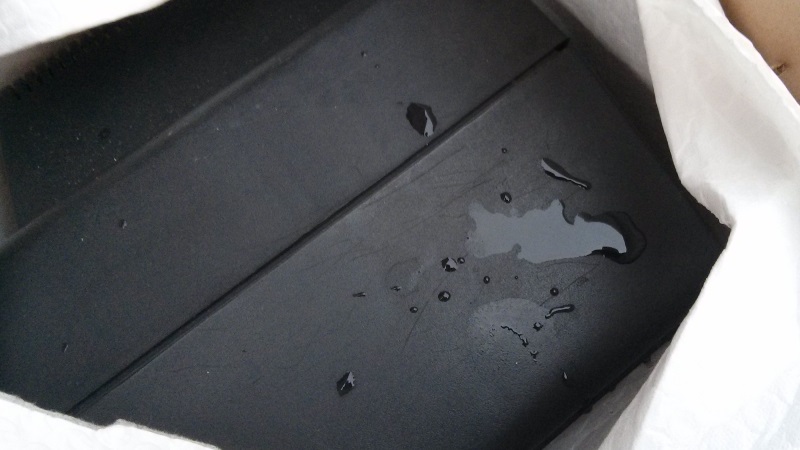 Fortunately, after drying it out carefully, it didn’t look like it had sustained any serious damage, so I set about trying to repair the fault.

Exactly as described by the seller, when it was powered on, the game sounds were playing, but the screen was completely black, not even a white dot visible on maximum brightness.

Looking at the troubleshooting guide, the first suggestion for “No Vector” is to “check for +/-5 VDC and -13 VDC at connector J204. Left to Right -5, GND, +5, -13”. When I checked J204 on the Logic Board, the -13V DC rail was missing (just measured about 0.67V which looks like a diode voltage drop). I checked the other end of the -13V wire on P204 on the Power Board, with the same result. This confirmed the wires and connectors were OK, and it was a problem on the Power Board.

From the service manual, here’s a diagram of the -13V power supply circuit on the Power Board:

The two lines at bottom right are the incoming power supply which is about 9~10V AC. The Diodes D106 & D107 and the Capacitors form a voltage doubler, boosting this to 18~20V, which is then regulated by a 13V Zener DZ102.

I switched off power and tested D106 and D107 in circuit with a DMM, and it looked as though D107 was short-circuit. The resistor R106 looked fine. Since there were only a few components, and the 34 year old (!) Electrolytic capacitors were probably not in the best shape, I decided to replace the whole -13V regulator circuit.

The -13V rail is only used by IC301 (the MC-1408P8 DAC) and the circuit diagram even states “TO IC301 PIN3 ONLY” next to the -13V line so, after a quick visual check of the Logic Board and connectors, I couldn’t see any obvious signs of a short on the -13V rail which might cause it to fail again. It’s always worth checking before replacing parts though!

To do this repair, the whole Power Board needs to be removed, which involves removing 5 connectors, removing the HV lead (CAUTION: ensure it is discharged first) and desoldering 2 ground leads, 3 power leads and 4 leads connecting the CRT deflection yoke. The board is secured with two small cross-head self tapping screws. 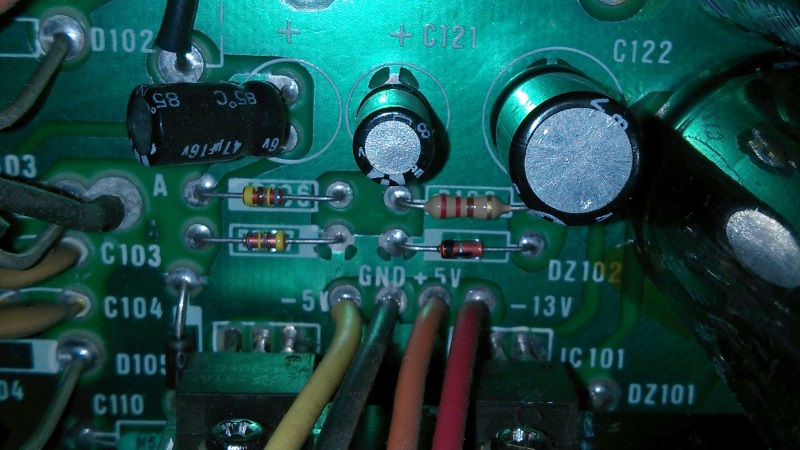 This picture highlights them more clearly: 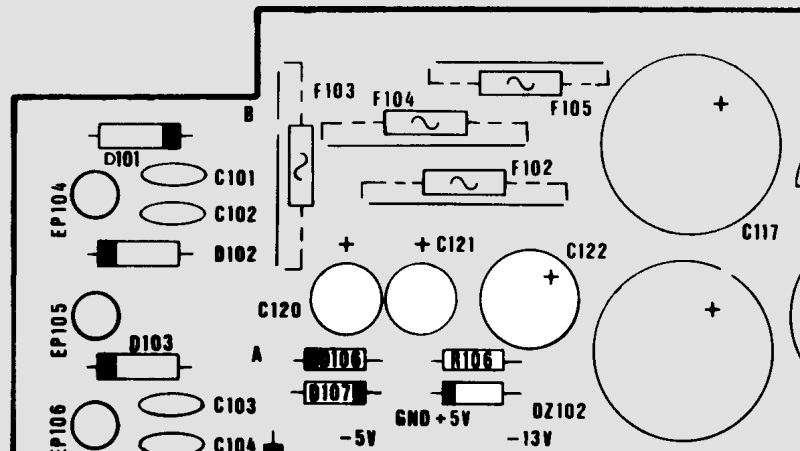 After removing the components, the most difficult part of the repair was clearing solder from some of the holes connected to the ground plane…

Once the original components were removed, I was able to test them out of circuit and found the following:

Presumably with D107 short circuit, this may have also damaged C120 by putting AC directly across the polarised electrolytic. In any case, I decided to replace them all with new parts.

After refitting all the connectors and soldering all the cables back in place, I left the connector at J204 disconnected from the Logic Board and tried measuring the -13V rail with the DMM probes touching the connector contacts. Initially, it wasn’t looking good as the -5V and +5V rails were present, but -13V wasn’t…. anyway, I decided to plug it into J204 and power on again…. and happily the Vectrex sprung back into life again! Perhaps the DMM probes were just not making a good contact with the connector?

Here’s the first power up after the repair:

For a machine that’s over 30 years old, I was astonished how beautiful and sharp the vectors looked – the display is amazing! (the video above does not do it justice). I’m very excited to finally have a Vectrex to tinker with… now I just need some more games and overlays!

The console has the famous “Vectrex buzz” from the speakers, and I think the next project will be to try and fix that…