We ran into problems recently getting the NVIDIA 3D Vision Pro glasses to work on a dual-pipe stereo projector (clone mode stereo). The projector takes two DVI inputs, one for the left and one for the right eye at 1920×1080 and 60Hz. These are then displayed frame sequentially at 120Hz. The projector has the standard BNC connector which outputs the stereo sync signal for the glasses (Sync and Ground).

The NVIDIA RF base station (pyramid) has a 2.5mm stereo jack socket which accepts external stereo sync, so we tried feeding the projector sync into that input. Unfortunately, the pyramid seemed to ignore the external sync and wouldn’t activate the glasses…

We had the NVIDIA pyramid working well on another system in active stereo, using the 3-pin VESA sync output from the graphics card, so I decided to test that. This is what I found:

This is what the Sync LED looks like when the unit is persuaded to accept external sync: 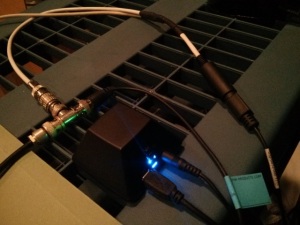 The solution was to make a cable which combines the Sync output from the projector with 5V (taken from USB) and Ground onto a standard 3-pin mini DIN VESA stereo connector (pinout shown below). The picture above shows the cable (white Y-shaped cable) taking Sync via a BNC connector (the T-piece is used to connect another IR emitter in parallel) and the connectors on the right are the 3-pin mini DIN stereo cable, which goes to the 2.5mm jack sync input on the NVIDIA pyramid.

This is the pinout of the VESA Stereo 3-pin mini-DIN socket: 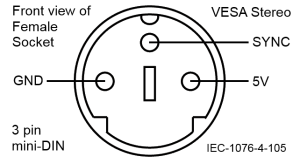 And here’s the corresponding pinout for the NVIDA 3D sync jack:

Caution: the jack plug isn’t a great choice of connector for something carrying GND and 5V, as there is obvious potential for a temporary short when the plug slides in and out of the socket. Avoid connecting/disconnecting the jack when the system is powered up. It’s safer to disconnect the USB and mini-DIN plugs.