We have one of those multi-function scanner/printer/fax/copier machines at work, the Brother MFC-8860DN. After a few years of faithful service, it started displaying “Fuser Error” and refused to print. We needed a new one fairly urgently, so I immediately bought a new HP one as replacement, but I wasn’t quite ready to send the old Brother to the graveyard and decided to try replacing the Fuser.

Having switched off the power, I pulled the back cover off the printer and located the fuser unit. This wasn’t too difficult to get to: there are two panels which pop out, two screws to remove, and two more covers to gain access to the connectors for the heater and sensor cables.

The picture below shows the panels/covers to be removed. The Panels A and B can simply be popped out by bending one of their plastic “hinges” at either the left or right hand side. The cover C is held on by one cross-head screw, and the cover D simply pops off if you push on the spring tab (near the letter D below). Having removed cover D, you will gain access to another cross-head screw. After removing those two screws, and disconnecting four cable connectors, the Fuser can be lifted out of the printer.

The Fuser is basically just a heated roller, so there are only a limited number of things that could go wrong. For example, it could be a loose connection, a burnt out heating element, or a faulty sensor.

At the left hand side there are two fairly thick cables with spade connectors, and the cover has a temperature warning sticker. It seemed fair to assume these were the heater terminals… 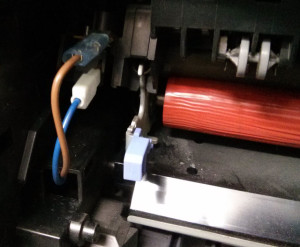 Having pulled off the two spade connectors, I measured the resistance and they were open circuit. Concluding that the heating element had burnt out, I ordered a new Fuser unit (Brother LU7941001).

When the new unit arrived, I measured the resistance across the same two terminals and found about 4.5 ohms. So, if you have access to a multimeter, this is a simple way to test if the heater element has burnt out.

When the new unit arrived it was a simple job to reinstall. If you are attempting this job, there are a few final things to be aware of:

The printer then needs to be told that the Fuser has been replaced, and I found out how to do this here. Enter the maintenance menu by pressing MENU * 2 8 6 4 with exactly the right timing (about 1 second per button push). It took me several attempts to get this to work. Another way is to hold MENU while you power on the machine. From maintenance mode you then:

Having done this, the printer was back in operation again!