Our Modus recently developed an alarming fault, where the dipped headlights or full beam flash on briefly when using the indicator stalk, or going over a bump in the road… not good! It could be pretty dangerous if someone thinks you’re flashing to let them out at a junction. This is the second time this has happened to us, so I thought I’d explain the cause and how I fixed it.

Basically, the problem was caused by a wire snapping off where it enters a connector inside the indicator stalk housing. Every time you move the indicator stalk, it flexes the wiring and after a few years it breaks due to fatigue on the wire. Here’s the offending wire, which you can see has broken free of the connector: 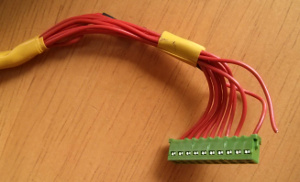 These are insulation displacement connectors, where the wire is pushed down between two blades. These pierce the insulation and make contact with the wire. Obviously, they also act as a nice point of stress to encourage the cable to fracture as it is flexed.

This is low-voltage logic wiring, and doesn’t carry much current judging by those tiny wires. It probably connects to some kind of digital controller and  uses MOSFETs to switch the lights.

Anyway, this is the second time this has happened on the same car, with about 2 years between occurrences. The first time, it was the right-most pin (as shown above). That previous repair is still good, but this time the wire next to it has failed.

Update: in June 2015 the right indicator stopped working. Again, this was due to a broken wire (the third one from the right this time). This was fixed in exactly the same way, as described below. Since I first posted this in April 2014, that’s just over a year gone by since the last repair.

You might find that several wires have broken simultaneously on your Modus (as Moss mentions in the comments below). The good news is that all of them are wired “straight through” so that pin 1 is connected to pin 1, pin 2-2, pin 3-3 etc. for all ten wires, so you should be able to reconstruct the correct order! 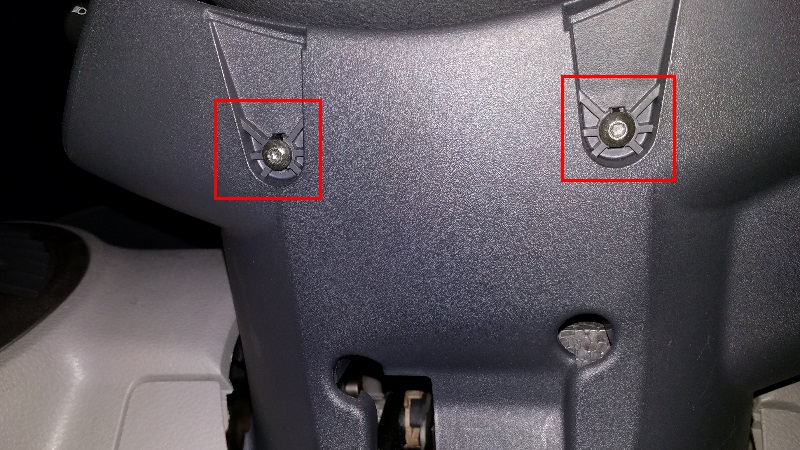 Here’s a view of the steering height adjust release lever on the 2006 Modus. I had to release this lever before I could lift the housing off: 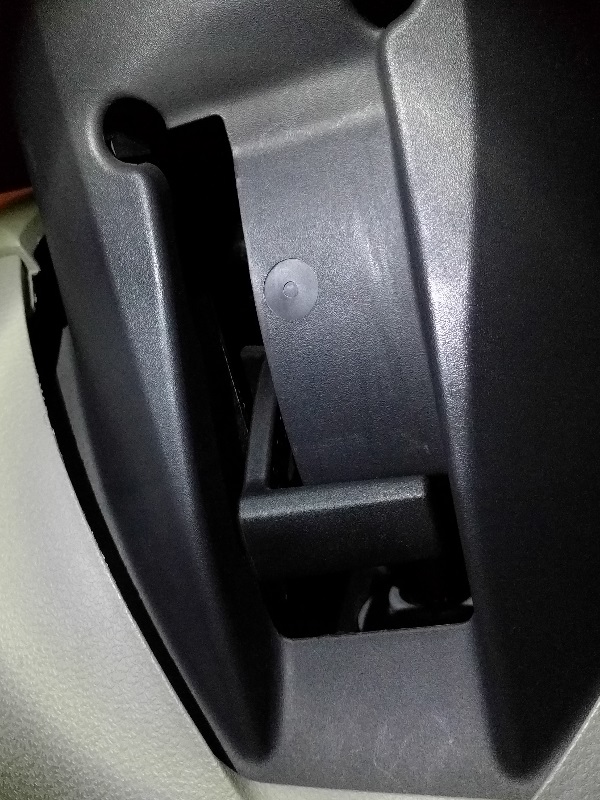 The upper section of the steering housing doesn’t need to be fully removed, but can be lifted out of the way. The indicator stalk module unclips and slides out of the steering column (that part at least is  a surprisingly nice piece of design).

To fix the broken wire, I soldered in a short length (about an inch) of new cable to extend the broken wire so it will be under less stress, and insulated with heat-shrink tubing: 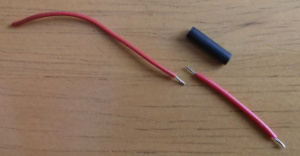 If you are considering doing this job, it’s probably worth adding that you need access to a soldering iron and some heat-shrink tubing (the wires are quite small, and would be hard to join by crimping I think).

Note that the distal end of the wire (which will go into the connector) is the original wire, to ensure it is the proper gauge for the connector. I gently picked out the remains of the broken cable from the connector with a pin, and pushed in a fresh piece. I then tested all pins for continuity, and all was good.

Again, if you are planning on doing this, be aware that the connector is fairly small and it’s fiddly to get the wires in (these connectors are not designed to be repairable – just intended for a single use / factory fit). It is possible though, if you have patience 🙂

Here’s a shot of the front side of the repaired connector. Note the black heat-shrink tubing on the repaired wires: 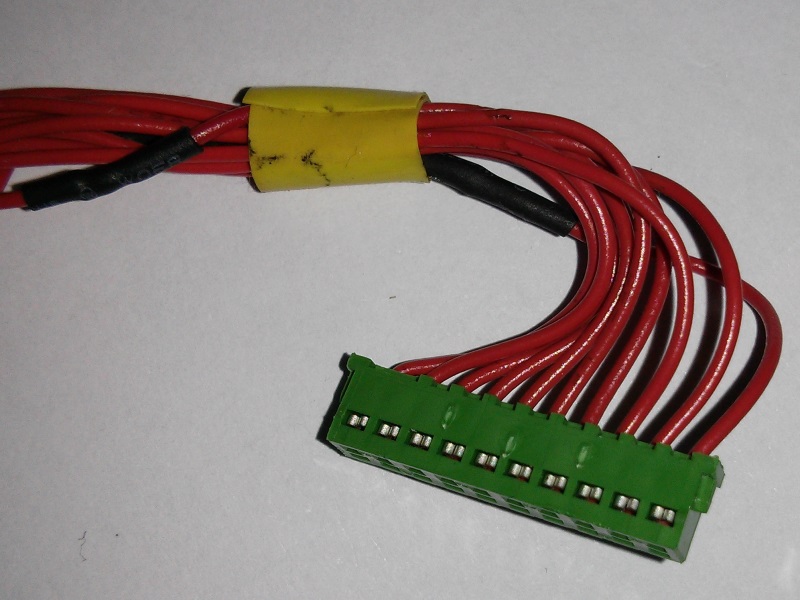 Here’s a close up of the rear of the repaired connector, showing the wires pushed in between the blades of the IDC connector: 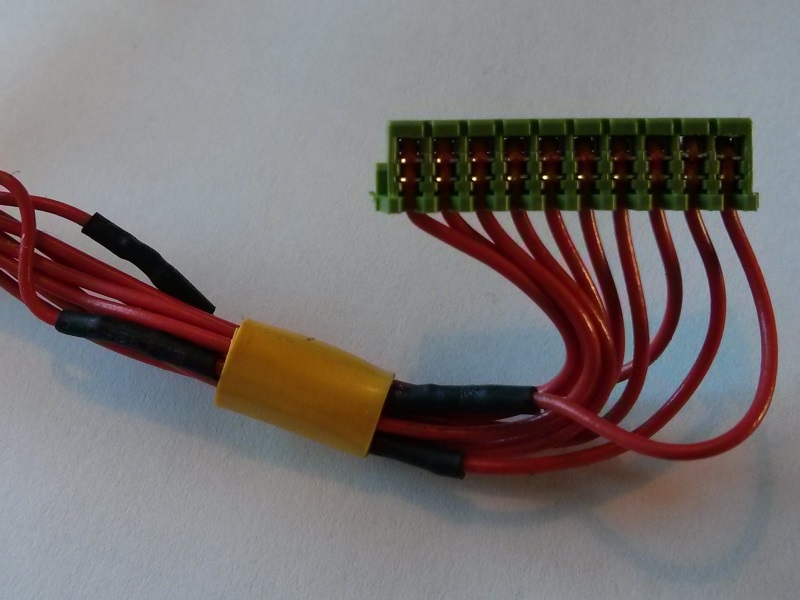 This is what it looks like when re-installed inside the indicator stalk module. Note that the central part (with the PCB and connector) is mobile, and moves when the stalk is used. 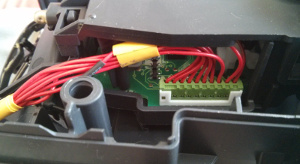 Here’s another shot of the internals of the indicator stalk assembly and wiring: 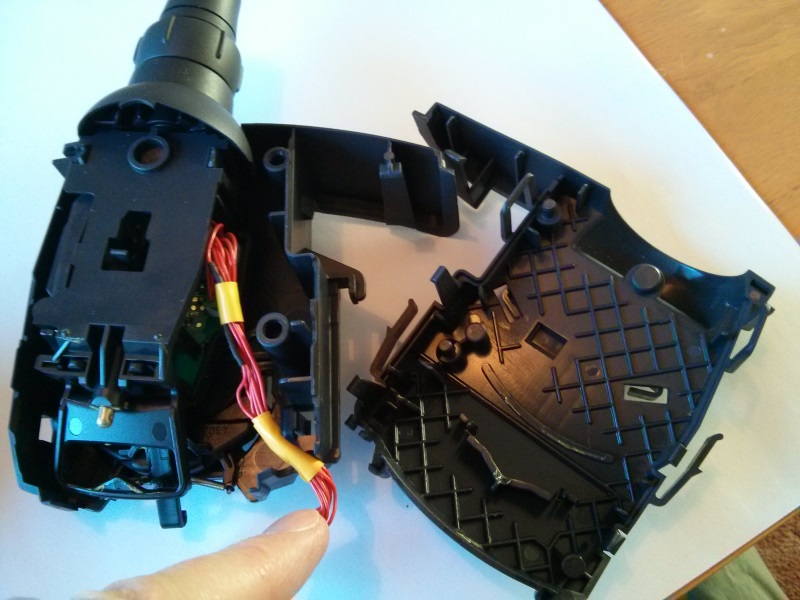 Finally, here are some images showing the indicator and headlamp stalk units completely removed, showing the wiring loom between them: 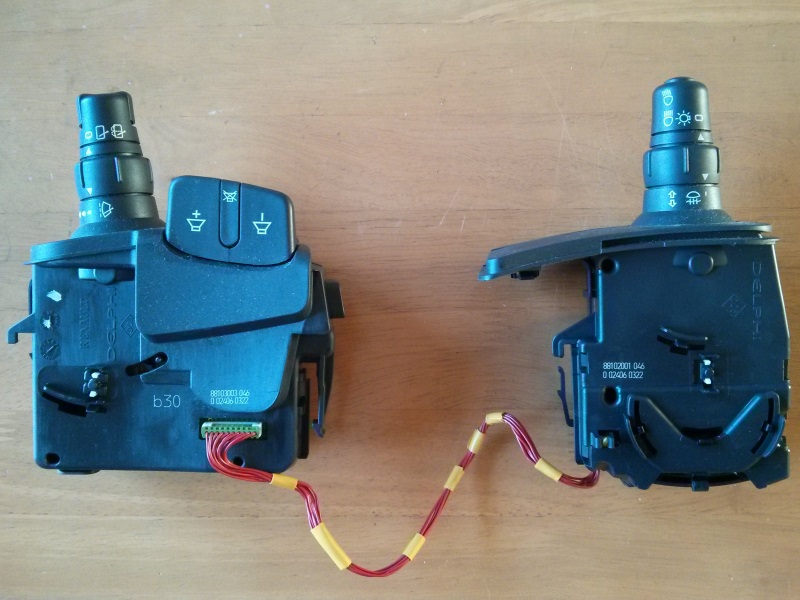 And here’s a close-up image showing the connector on the headlamp stalk unit fitted: 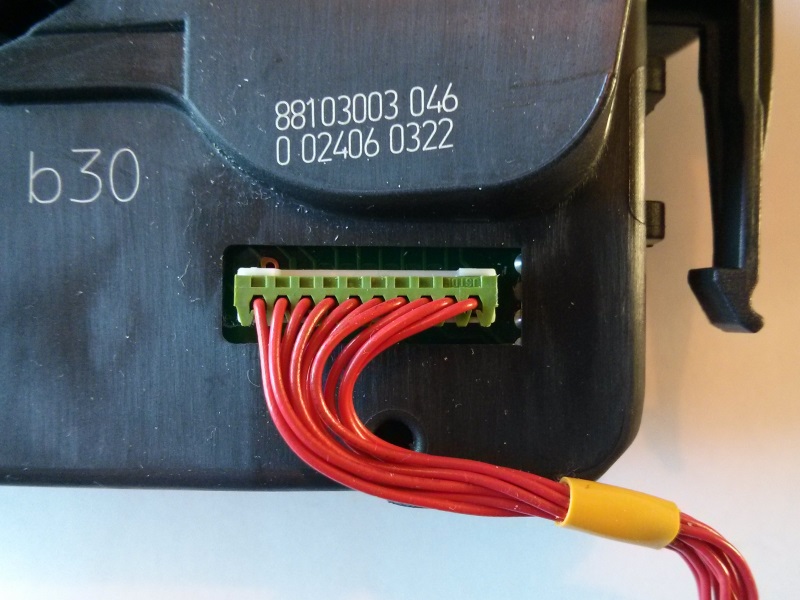 Having reassembled it, I did a complete test of all the lights and it all works fine again. Well, until next time at least!

Further investigation of the connectors…

So far the “zero cost” fix above has worked for me… but I was curious about the type of connector used, and whether the whole assembly could be replaced with new parts. Looking at the photo above, I noticed the connector has “JSTDF” printed on it, which made me suspect this is a JST connector. After a bit of searching on their web-site, I found the KR connector and CK connector, which look similar:

These are 2mm pitch IDC connectors, and the 10 pin version would be 22mm long. I haven’t actually checked if this is compatible, as our Modus is working fine and I’m reluctant to take it apart again just to measure the pitch/size of the connector!

Anyway, the JST datasheet says that the housings are “Compatible with the PH crimp style connector”  which is interesting, because crimp connectors and tools are cheap and easy to use, so it might be possible to make a new 10 way cable using these. Again, I’ve not checked if these are compatible but RS have the PH connectors and even have ready made cable assemblies. Here are some direct links to the components on the RS web-site:

If these connectors are compatible, this would be another possible fix to consider!

To make the nano text editor nicer to use for development, you can change the tab size to 4 spaces, set it to convert tabs to spaces, make it always display line and character numbers and enable multiple file buffers. Since I always forget how, here are the settings that go in the ~/.nanorc file:

The multiple file buffer feature is really useful, as you can load multiple files with CTRL+R and quickly switch between them with ESC follow by > or <.

Sometimes you need hard tabs (in a Makefile for example). To achieve this, the -I flag can be used to ignore the .nanorc file for Makefiles:

After much searching, I found a reasonably priced pressure sensor for my project. It’s a Danfoss AKS 32R, which has 0-300psi range (20.68 bar). It takes a 5V supply, and the output is analogue ratiometric, ranging between 0.5V and 4.5V DC. 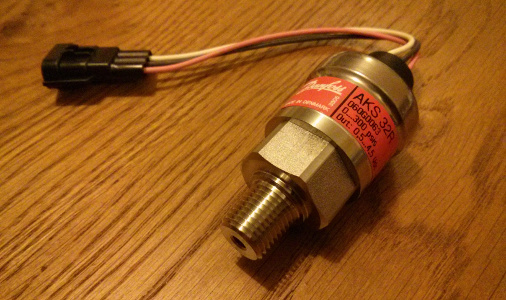 No prizes for guessing where I plan to install this sensor!

I was keen to see if the sensor worked, so I tried hooking up a meter and blowing into the end. This produced a miniscule change in output voltage. After a bit of  research, it seems that maximum lung pressure during exhalation is only about 2.1psi for an adult male, which is less than 1% of the sensor’s measurement range. Hmm… that explains why it didn’t give much of a reading then!

Quite a bit of work will be needed to plumb this in. I might need to fit a pulse snubber to protect the sensor. To be continued…

For some time I’ve been using the DS18B20 to measure boiler temperature, but decided to upgrade to the TSIC 306 which has a wider temperature range and faster update rate.

The TSIC 306 is a fairly small TO92 package (about 4.5mm wide, 2.2mm thick and 4mm high) so I decided to try encapsulating it in an M4 hex M/4 spacer (as suggested here). This worked out pretty well, as shown below, pictured alongside the original thermostat from the Gaggia Classic. 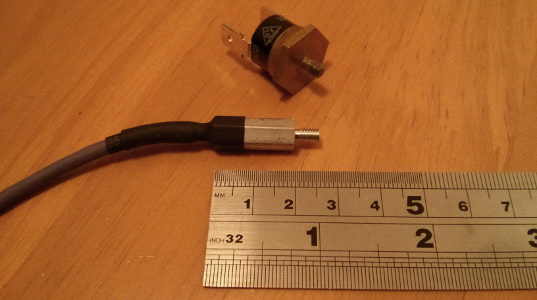 The spacer is M4 Aluminium, 20mm high, 7mm across faces, male to female (Richco HTSA-M4-20-2, Farnell 1898535). The male thread has been filed down to about 6mm length, to match the existing thermostat.

I drilled out the female thread in the spacer with a 4.5mm bit to 15mm depth, filled with heat transfer compound and pushed the sensor deep into the spacer. The three sensor leads are individually insulated with heat shrink tubing, and more heat shrink is used to encapsulate the cable and sensor.

Aluminium has excellent thermal conductivity, and simply touching the case with a fingertip is enough to trigger an immediate change in temperature reading!

The only awkward part was fitting it into the boiler. I wasn’t able to do this in situ, but had to remove the steam wand and knob, unscrew the four allen bolts around the group to free the boiler. This allowed enough freedom to tilt and move the boiler slightly to the right, so that I could screw in the sensor by hand.

The new sensor is up and running on the machine, and I’ve left the DS18B20 installed in parallel, so I can compare performance.

At the weekend we passed the amazing Rudston Monolith, which is almost 26ft in height and dates back to the late Neolithic period (“possibly circa 2000 B.C.” according to the placque). 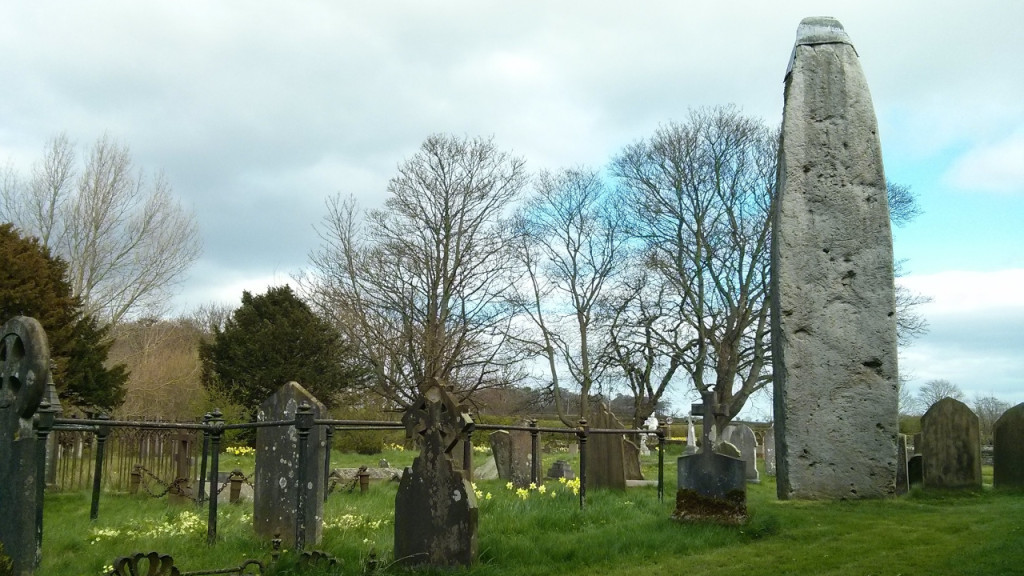 Here’s another view next to the church. This is a really beautiful spot at this time of year, with the daffodils in flower. 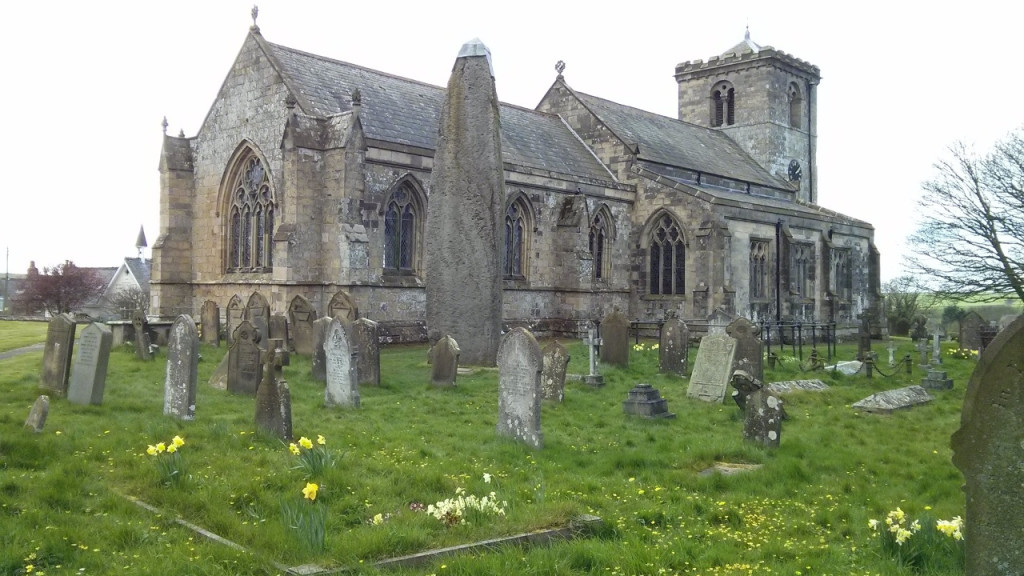